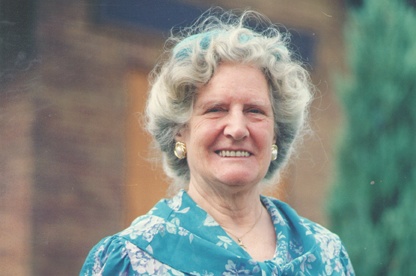 A British high-school teacher turned storyteller, she served with her pastor husband, Gerald, in churches in Britain, South Africa, and Canada, and told stories to children in many countries.

Biola University, California, conferred the degree of Doctor of Literature on Mrs. G, in recognition of her fidelity to Scripture and of her concern for the underprivileged, including her leadership in South Africa, in providing an out-patients soup kitchen for Africans in a mission hospital and in erecting and equipping a children’s wing for African babies and children.

They are broadcast in English on hundreds of weekly releases in North America and worldwide by shortwave, satellite and internet.

Mrs. G believed that “all scripture is inspired by God”.  So she studied the text to make sure her stories brought out the meaning of the scripture.  As part of her research, she visited Israel six times, three times as a guest of the government of Israel.

The stories combine accuracy with modern appeal. Mrs. G made the Bible come alive for thousands of children—and adults—at home, in church, in schools, camps, cars, hospitals, in all kinds of places.  They are entertaining, educational, and full of spiritual instruction.

The stories are for children of all ages—3 to 103!

Bible Stories Alive are “you are there” stories. Things of long ago come alive and you feel part of the drama. One little girl says, “I feel I am with Jesus,” and a medical doctor says, “You make the Bible people become family”.